Amaezing Art- Tamil Inscription In Egypt at 1st BC. 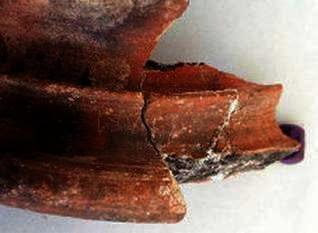 The same inscription is incised twice on the opposite sides of the jar. The inscription reads paanai oRi, that is, pot (suspended) in a rope net.

An archaeological team belonging to the University of Southampton in the U.K., comprising Prof. D. Peacock and Dr. L. Blue, who recently re-opened excavations at Quseir-al-Qadim in Egypt, discovered a fragmentary pottery vessel with inscriptions.

Dr. Roberta Tomber, a pottery specialist at the British Museum, London, identified the fragmentary vessel as a storage jar made in India.

Iravatham Mahadevan, a specialist in Tamil epigraphy, has confirmed that the inscription on the jar is in Tamil written in the Tamil Brahmi script of about first century B.C.

In deciphering the inscription, he has had the benefit of expert advice from Professor Y. Subbarayalu of the French Institute of Pondicherry, Professor K. Rajan of Central University, Puducherry and Professor  V. Selvakumar, Tamil University, Thanjavur.

According to Mr. Mahadevan, the inscription is quite legible and reads: paanai oRi, that is, ‘pot (suspended in) a rope net.’ The Tamil word uRi, which means rope network to suspend pots has the cognate oRi in Parji, a central Dravidian language, Mr. Mahadevan said. Still nearer, Kannada has oTTi, probably from an earlier oRRi with the same meaning.

The word occurring in the pottery inscription found at Quseir-al-Qadim can also be read as o(R)Ri as Tamil Brahmi inscriptions generally avoid doubling of consonants.

Earlier excavations at this site about 30 years ago yielded two pottery inscriptions in Tamil Brahmi belonging to the first century A.D.

Another Tamil Brahmi pottery inscription of the same period was found in 1995 at Berenike, also a Roman settlement, on the Red Sea coast of Egypt, Mr. Mahadevan said.

These discoveries provided material evidence to corroborate the literary accounts by classical Western authors and the Tamil Sangam poets about the flourishing trade between the Tamil country and Rome (via the Red Sea ports) in the early centuries A.D.

Email ThisBlogThis!Share to TwitterShare to FacebookShare to Pinterest
Labels: Amaezing Art- Tamil Inscription In Egypt at 1st BC.