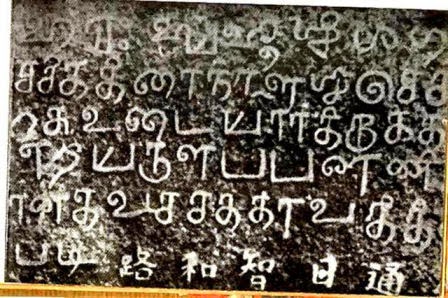 This Tamil Language Inscription Was Found In Ancient Chinese Shiva Temple.  It Was Found about 500 Miles North to Canton,  in a Place called Chuan Chou. This is a Port  City. it was the Important Port cityin the Ancient times also. 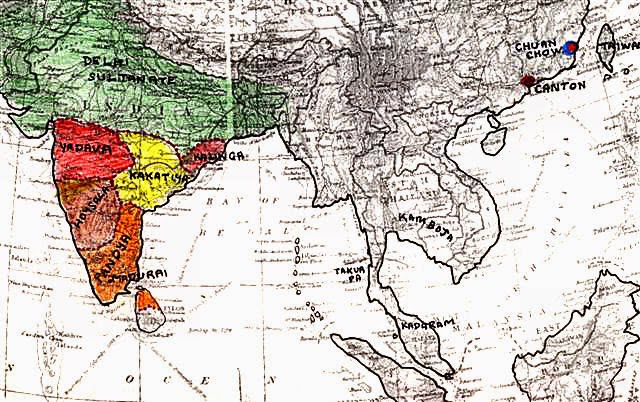 A straight sail would be a longer distance which would take them across the Bay of Bengal, Straits of Malacca, Gulf of Siam, and South China Sea. They would have to sail around the Malay Peninsula. This would have increased their journey by more than a thousand miles and would have taken up several more months.

Apart from Canton, the Tamils had gone to other places also and
established their own colonies. The merchant guilds like 'Thisai Aayiraththu AinnuuRRuvar' was very active around this part of the world.

'Sekasai Khan' in this inscription is the name of Kublai Khan himself.
His full name was Kublai Sekcen Khan.
Sekcen Khan became Sekasai Khan in Tamil. 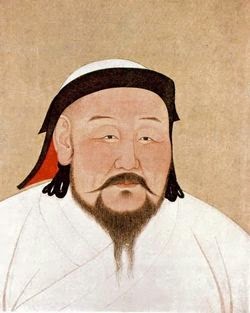 The Mongols were a loose group of tribes wandering around the Cental Asian grasslands with their horses and cattle. They were warlike.

At one point of time, a great leader among them rose. He united all the Mongols and made them into a powerful force. He was also a clever strategist. He conquered Persia, Central Asia, Russia, parts of Europe, parts of Middle East, and China.

No single man till today has conquered so much land with his armies within a short period of time.
He was elected as the Grand Khan, the supreme leader of the Mongols.

After his death, there were problems of inheritance. After Chengiz Khan, the Mongol Empire was divided into four parts of which China was one. The others were Persia, Russia and Europe, and the original homeland of Mongolia itself. One of them would be elected as the Grand Khan or Khan of Khans.

Kublai became the Grand Khan of all Mongols. He took China as his part of inheritance and ruled from there. He built Beijing and moved the capital there. He also had a summer capital. His country was big, wealthy, and prosperous.

He was mighty and powerful. His armies were immense, powerful, and invincible.
Only on two occassions, his armies failed. One was a naval expedition to Java which did not take place.
The other one was huge naval invasion of Japan. Due to a freak storm known as Kami Kaze, the ships were all destroyed. Whatever was left of his army was killed off by the Japanese.

Although he was a Mongol, he did not Mongolise the Chinese; neither did he force any change in administration. He only made it smoother and more efficient.

His rule of thumb was efficiency. He revolutionised communications and postal systems. His espionage services were superb.

In spite of all this, he never learned Chinese.
He started an Imperial Dynasty called the Yuan Dynasty.
He ruled during the time when the Imperial Pandyas were ruling Tamilnadu and Kerala.
The Pandyas were on very close friendly terms with the Great Kublai Khan.
At the time that the inscription was inscribed, Kublai Khan was very ill.
Marco Polo, the Venetian traveller spent seventeen years at the court of Kublai Khan.
When he found that the Great Khan was getting old and sickly, he got permission and left China.

It should be noted that he temple was consecrated according to the Firman of the Emperor.
The word, 'Firman' is used in the inscription. 'Firman' is a Royal Order, instuction, or proclamation. When the Mongols captured the Middle East, Persia, and Central Asia, they adopted words and traditions of these regions.

The last line of the inscription is in Chinese characters.
Chola types of statues were also found in the temple site.
This is a rare inscription in Tamil which is found outside TamilNadu.

Thanks to Professor Doctor S Jaya Barathi.
Posted by krishna at 05:16

Email ThisBlogThis!Share to TwitterShare to FacebookShare to Pinterest
Labels: Tamil Inscription In China